They can be overpowering or subtle and sexy and definitely add depth and dimension to rich floral or amber perfumes. What we call animalic notes are not everyone’s cup of tea though! Nowadays we are more likely to use synthetic replacements than actual materials from animals for the obvious reasons and often there are a lot of what we refer to as animalic in flowers such as Jasmine and tuberose too.

White florals contain traces of the chemical indole (also present in Jasmine) which can be added to a fragrance in trace amounts for effect. Alone indole has the odour of decay and can be extremely unpleasant as is the case with many animalic notes. Castoreum, which is from the glands of the beaver or a synthetic reproduction is slightly less alarming but can have quite urine like notes which at low levels give a honey aroma. Castoreum is used in chypres and leather fragrances along with woods, mosses and labdanum or birch tar and iso butyl quinolene (leather notes).

Ambergris, from the sperm whale is the most gentle of the animalic notes and is found washed up on beaches mainly in New Zealand. It has an aromatic almost marine like note which I find quite soft musty and musky.  The synthetic versions are most often used and I find it works very well with sandalwood for a soft skin like accord.

**NOTE**Ambergris must be ground to a fine powder and macerated in alcohol for AT LEAST 6 months to mature if not longer. If you do end up buying some of this rare and expensive material don’t be tempted to use it right away – it’s just a waste!

Natural musk is completely outlawed due to the near extinction of the musk deer from which it has historically been collected. The musk notes we experience today are all synthetic and in actual fact are  perceived as much cleaner than you would expect considering it’s origin. This is due to their extensive use in laundry detergent fragrances, hence the term “laundry musk”.

Nitro musks such as Galaxolide by IFF (a major component in The Body Shop White Musk) are used due to their substantive and long lasting effects through a wash at high temperatures. They are not very soluble in water which means they will stay on the fabric through the wash cycle. Of course this means that many are not biodegradeable  or particularly environmentally friendly but new versions such as

Musk notes are used in most fragrances for their fixative properties and the soft comforting effect they give to a fragrance. Many people, including perfumers are anosmic to different musks and so they are often used in combination with each other.

PrevPreviousWoody Notes in Perfume
NextYou can make your own perfumeNext 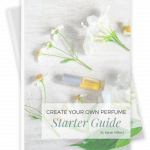