Let me start out by saying that I don’t review products or fragrances pretty much ever, I’m far more interested in teaching people how to create their own than in critiquing work of others.  However people always ask me what skincare products I use so I wrote a post about it HERE and mentioned that my new favourite eye cream was Revital Eyes by Nourish.

Nourish is a brand I’ve had my eye on for a while as it’s created by Dr Pauline Hili who I worked with at Neal’s Yard Remedies many years ago. Pauline has always been ahead of the curve with natural ingredients with provable, proper scientific back up as well as sustainability and ethics.  Natural and organic is all very well but products need to be effective too or what’s the point. 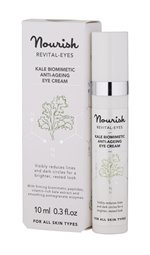 Here’s what it says about Revital-Eyes on their website:

Well firstly it’s light and cooling on the skin when applied – there’s nothing worse for me than a thick greasy eye cream.  The cooling effect is lovely and soothing – great if you’re feeling a bit bleary eyed in the morning.  It sinks straight in so you can apply make up right away if you’re in a hurry and it also feels like it has a slight firming and brightening effect under my eyes.  The major thing though is that it’s not just surface stuff, it has proper grown up anti ageing ingredients in it too such as biomimetic peptides.

One of the things that happens as we age is that elastin (responsible for skin elasticity and tightness) breaks down and we have decreased collagen production which means that over time we have thinner and more wrinkled skin which loses it’s tone and starts to sag. Caprooyl tetrapeptide-3 helps stimulate production of collagen and Palmitoyl tripeptide-5 also stimulates collagen production in the skin as well as having good firming and moisturising properties. So as well as having natural foodie type ingredients such as kale and macqui berry there’s also the cutting edge science bit too.

One thing to watch out for with this product is that the pump dispenses too much if you push it all the way down – halfway is plenty for both eyes!

If you need a little bit of extra glow for the party season Nourish do a fab product called Golden Glow Illuminating Face Shimmer which also contains tripeptides – try mixing some with your foundation or use it under make-up.  This will be great for summer too!

All Nourish products are approved by The Vegan Society